Runners from across the Maritimes find success at in-person marathon weekend in Fredericton
September 10th, 2021

Stanley Chaisson, of Charlottetown, PEI shaved 22 seconds off the men’s marathon record, finishing the 42.2k event in 2:29:20, beating the record previously set by James MacLellan in 2019. 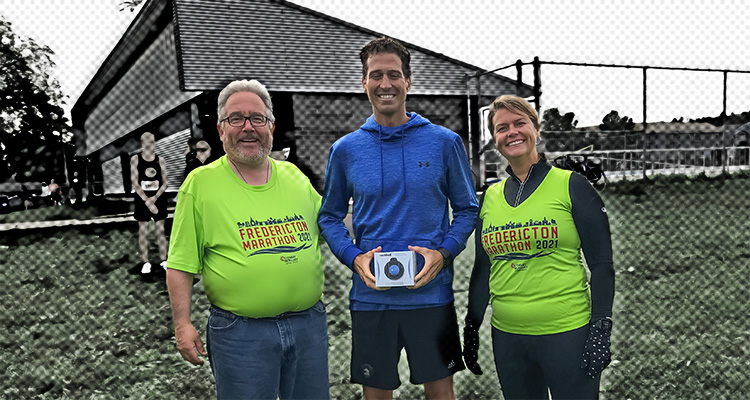 The 43rd annual Stewart McKelvey Fredericton Marathon took place over a three-day period during the weekend of September 3-5, with the main marathon and half-marathon events held on Sunday.

“It was so nice to conduct an actual in-person marathon event,” said Bruce Macfarlane, co-race director.

“It took two and half years to get it done but we were so happy to see runners smiling at the start and finish lines,” added Christine Little, co-race director.

Chaisson placed first in the men’s marathon, followed by Dennis Mbelenzi and Jonathan Walker, both of Halifax, NS.

In the women’s marathon, Kalli Van Vulpen of Amherst, NS and Meaghan Strum of Halifax, NS crossed the line at 2:57:27. Kamilla Pinter of Fredericton, finished third with 3:06:10. 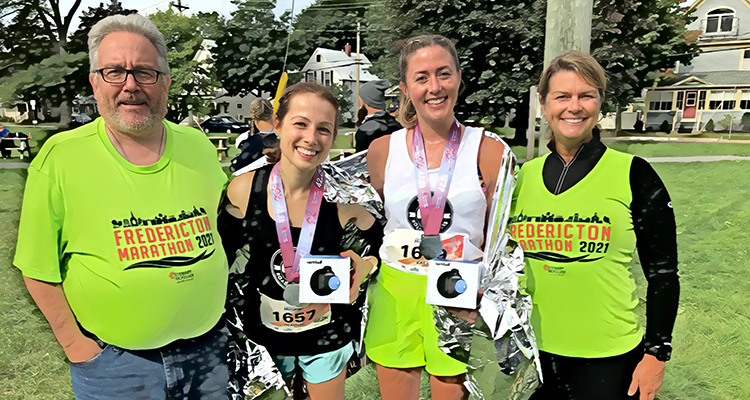 Kiernan McDonald of Halifax, NS and Alex Neuffer of Stratford, NS finished the men’s half marathon with times of 1:06:25, followed by Mohamed Aagab of Saint-Leonard, at 1:07:28.

Wilson placed first in the women’s half marathon. Maura Wieczorek of Halifax, NS came second, with Stephanie Seaward of Dartmouth, NS in third.

An additional half marathon event was added to race weekend calendar on Saturday. David Holder, of Bedford, NS crossed the finish line at 1:20:44. Sarah Beairsto of Fredericton placed second with 1:23:51, followed by Rayleen Hill of Dartmouth, NS at 1:24:11.

In the 10k event, also held on Saturday, Cyr placed first followed by Paul Gallant of Dieppe and Dean Strowbridge of Willow Grove. On Friday, Vinton Gaskin, of Oshawa, ON ran 18:49 to place first in the 5k, followed by second-place Julia Reid of Fredericton and third-place Emmett Knee of Saint John.

Approximately 100 children participated in the Youth Fun Run on Saturday.

The Fredericton Marathon is aiming to return to its traditional Mother’s Day race weekend in May 2022.