Loose the Pounds and the Pills – A Running Success Story

Kelly O’Toole started running in the fall of 2013, encouraged by her sister and a few runner friends to give it a try.  Tipping the scale at 209 lbs, this was a daunting decision for her.  She would go for walks pushing her sons in a double stroller and the idea of running was for the least intimidating.  She was on medication for postpartum following the birth of her youngest for 2 ½ years and struggling to find a balance with her oldest suffering from many allergies, including a life threatening one and her youngest being born prematurely at 31 weeks.

When asked how she felt during the first few weeks of your running, O’Toole said:

"I thought that there was no way I would be able to run long distances, of any kind.  Back then, I thought that 5km was long! But just doing a short amount was enough to give me the mental boost that I needed. It didn't take weeks to see a difference.  Immediately, I was starting to feel better about myself, as I was doing something for me. I was able to step out the door and forget everything for that short time".

At first, her only plan was running from 1 power pole to the next, gradually increasing to 2 power poles, 3 power poles, etc. until she reached a kilometer without stopping.  From there, she just kept building on her distance. 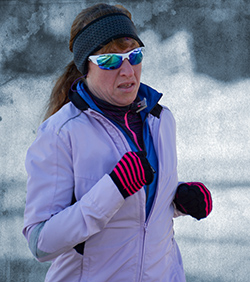 She added that her first injury was a result of poor shoeing. Once she was fitted with the right running shoes, it made a huge difference.  Furthermore, she was able to get off and stay off the medication that she was on for her mental health.

The Miramichi River Runners Club(MRR) was there to support her from the start.  Club members made sure that O’Toole’s questions and worries were addressed with positivity.  The club holds running events throughout the year, even in winter and O’Toole questioned her sanity when she decided to run in the snow for the first time.  There was always someone there to remind her that she was not alone and to help her learn about running in the snow.

Before she started running, Kelly registered for boot camp twice a week and tried to keep up the pace but with difficulty. However, once she started running, boot camp became easier and her endurance improved, both at boot camp and running. During the summer, a runner friend encouraged her to join a women's group of road bikers. Biking once a week anywhere from 23 to 43 km in 2hrs made a big difference in her leg strength, a sport that she has kept up to now.  Kelly now tries to run twice a week with one of those runs being a long run on the weekend, at least 10 kms.  She also started going to RND fitness to help increase her strength and speed, even adding hill training on the nearby hill.

O’Toole ran her first race, a 5 km, on July 19, 2014 in Miramichi with a time of 30:43.   The first year or so, she tried to run as much as possible.  Since the MRR held races each month, she registered for the races that she could attend, which helped her to build on distances and to make a commitment to herself.  The more distance and time that she put into running, the more the pounds started to fall off.  On July 18, 2020, she finished the first live race on the RunNB calendar, the Irish Festival 5-km in Miramichi with a time of 23:45, good for 3rd place in the women’s category.

All those efforts paid off and gave her even more reasons to refuse to quit running in moments of weakness; the positive changes in her mental health were felt immediately. O’Toole admitted that the support that she received from her husband, who is away for work 2 weeks a month, and her parents made it easier for her to get that one run done when she felt less motivated.  They recognized that she needed to a little push to get out the door and go for a run.

When asked what was her best feel good moments about running, Kelly said:

"When I achieve a new personal best time or achieve a new long distance, those are the moments that feel great.  I have run the half marathon distance twice. The 2nd time that I ran it, I was able to get my time under 2 hours".

At the end of each year, the MRR club has an award night and she earned 2nd or 3rd place in her age category.  The last 2 years, she earned 1st place for her age category and was awarded the Most Improved Runner Certificate in 2018.  She got on the podium a few times, earning a 2nd or 3rd place finish in different distances. (1mile, 5km, 5km cross country).  She also received the Ironman title a few times, for not missing any of the MRR calendar races through out the whole year.

To those who may be thinking about taking up running but who are too scared, intimidated, overweight, old or whatever other excuses, here is what O’Toole had to say: «If you are scared, but are thinking about trying to run, try to find people who will support you and encourage you.   Every day, every run will get better. You just need to take that first step out the door; everything will get easier from there».

Kelly O’Toole lives with her husband, Brent, in Whitneyville, NB, a small community located 22 km west of Miramichi.  The couple has two sons, Liam, 12 and Riley,10.