The RunNB 5km Championship, held in Miramichi on June 19th under a constant rain, attracted 137 runners.  Despite the rain, the top 3 in the male and female divisions, competed hard for a spot on the podium.

However, due to an error in instructions to race volunteers responsible for the turn around, the course was unfortunately 295 meters short of the intended 5000 meters’ distance.  Consequently, the times recorded cannot be recognized for a 5 km distance.

Gilles Gautreau, RunNB statistician, indicated that the results will specify that the distance covered in the race was a 4.705 km distance.  He added that the individual paces will be adjusted accordingly.

Mathieu Hébert of Moncton was crowned the winner of the event, finishing in 16:14. He was followed closely by Julien Thibodeau of Bathurst with a time of 16:39. Third place went to Timmy Basque of Shippagan, stopping the clock at 16:42. 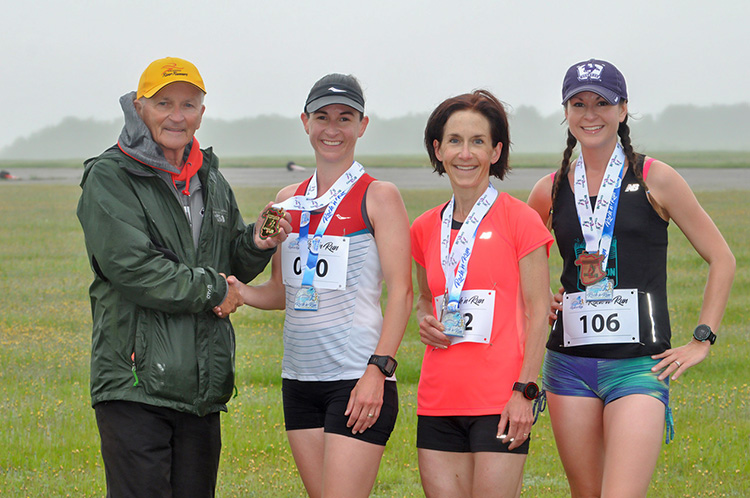 The first woman to cross the finish line was Meghan Duffy of Miramichi with a time of 18:06. Only two seconds separated her from her closest rival, Paula Keating of Miramichi who finished in 18:08. Suzanne Myers of Moncton finished third in 18:51. Duffy and Keating finished 5th and 6th overall respectively.

The Scott Bowes 5 km was held at the Miramichi Airport this year on a new certified course. The race, which was established in 2003, was previously held in Newcastle. Scott Bowes, who passed away accidentally on his graduation day, won the race two years in a row as an under 19 students in 2011 and 2012. The race attracted a record number of 226 runners in 2015.