With a two-year pause, the Tim Hortons Joe McGuire Road Race was back in action on a hot Saturday morning on July 30th in Woodstock.  This enduring event named after Joe McGuire, a NB running legend who passed away last April, attracted a total of 124 runners for the 3-distance event from all corners of the province, with representation from Nova Scotia and Maine, as well.

The 10 km race attracted 47 runners with local runners, Greg Sawyer of Saint Jacques and Paul Nosicka of Woodstock taking first and second place respectively.  Sawyer stopped the clock at 36:24, with a fast average pace of 3:39 while Nosicka followed him to the podium with a time of 38:45.  Sylvain Arseneau of Petit-Rocher finished third in 39:41.

The first woman to cross the 10 km finish line was Suzanne Myers of Moncton in 42:28, finishing 6th overall.  Nathalie Boivin of Bathurst took second place with a time of 48:46. Third place for the ladies went to Kim Perry of Rothesay who finished in 51:33.

In the 5 km distance, Ian Young of Fredericton was the fastest in 19:59.  Second and third place winners were just one second apart at the finish; Adrienne Boutiauy of Edmundston and James Whitman of Maugerville finished in 21:18 and 21:19 respectively. Eva Kosak of Hanwell finished first for the women in 22:00, 4th overall, followed closely by Clareta Livingstone of Woodstock who stopped the clock at 22:07.  Brittany Fecteau, also of Woodstock, took third place in 26:03.

Race Director, Jill Dunnett, said that runners observed a moment to pay tribute to Joe McGuire.  ‘The Race Committee is committed to carrying on the legacy of Joe and his phenomenal running career in years to come’, she added.  Some of Joe’s family were on hand, including his wife, Emily and his son Trevor, who stood at the 1-mile marker on the course and shouted out times as runners went by. This was something that Joe enjoyed doing these past several years. 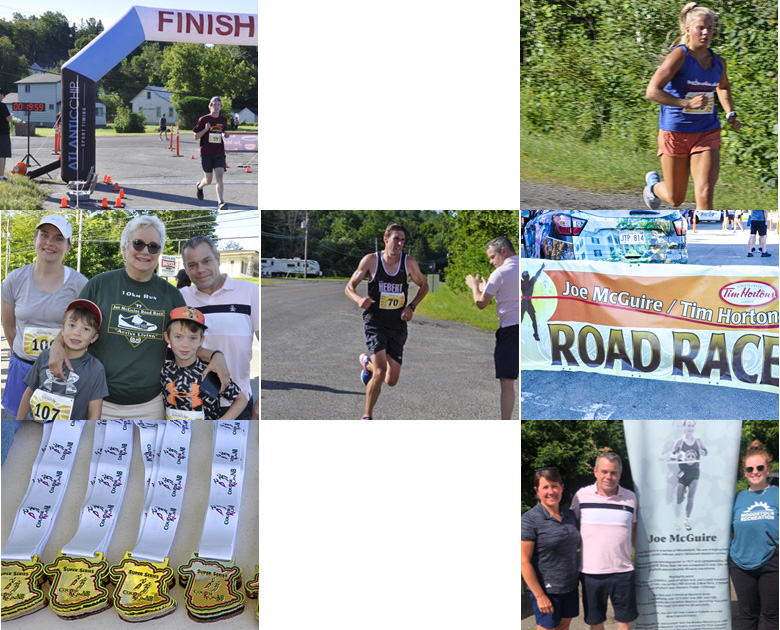