Never a Day Goes by Without Running or Walking

Louise Connely took up running in her early forties, wanting to maintain a good physical health. She was already fairly fit due to the time she had spent speed walking since her twenties. Her first race was a 10 km in her community after about a year of running.  "I had been running for over a year before I thought I was ready", she admits.  She now keeps a 6-day running schedule, averaging 10 km per day.  On her day off from running, she enjoys walking 10 km since you never get tired of walking, according to her. No wonder that she is now in the top 5 contenders in the RunNB Challenge with over 700 km logged since January 1.

Louise likes to run early in the morning since she still works full time as a manager in a medical clinic.  This allows her to do other activities at the end of the day.  "No matter what the temperature is, I stick to my schedule.  The coldest days do not stop me from running. I’m very disciplined and you have to be, because on race day, rain/snow /winds, they usually do not cancel due to poor weather ", she said.  She doesn’t like to run on the treadmill; all her runs are outdoors.  On the weekends, especially for the long run, she has a few running buddies accompany her which makes running more enjoyable.

Louise never races with headphones.  " just enjoy the run. My music is all the spectators along side the road cheering us on.  I never wear a watch either during my races; I find it distracting and stressful ", she said.

Her cross training includes seasonal cross country skiing (skating) which she practices 5 days a week, snowshoeing and hiking which has become her latest passion.  About 3 years ago, she started trail running with a small group of friends.  Spinning classes, twice a week, were also a part of her training in the last 5 years during the winter months; but with Covid-19, that is now on pause.  In the spring, she likes to bike, keeping her distances moderate but enjoying the scenery.

Her running bible is John Stanton’s, Running which she consults regularly when preparing for a half or marathon. Her first half marathon was in Fredericton on Mothers Day weekend which she usually runs every year.  Her first marathon was in Moncton Legs for Literacy in 2010, with a group of friends from Edmundston who had registered for the HALF.  They collected their race kits the day before the race and they were all set to go.   However, they somehow came to the decision to run the FULL and two hours before the race, they were able to make the change and headed to the start line with their bib indicating Marathon.

Louise really enjoyed that marathon experience and she started training seriously for the Big One.  Five years later, she qualified and ran her first Boston Marathon which she did for five consecutive years, from 2015 to 2019.  "I was quite excited last year to run my 6th Boston Marathon at the age of 60, unfortunately it was cancelled last April due to the Pandemic."  So the day of the race she ran a 42 km marathon for her own satisfaction and was quite pleased with her time.  "After training so hard all winter I was due for the run.  Boston marathon is scheduled for October in 2021!!!!", she said.  She enjoys travelling to races; Vancouver, Toronto, Montreal, Ottawa and Florida are checked off her bucket list.

Running is her passion and she is very grateful to be healthy and able to do what she enjoys.     "My motivation is always there.  There are 24 hours in a day. You can do a lot in a day.  Imagine when I retire from work", she added.

Her advice to anyone who may be thinking of getting into the sport of running: "Go slowly, its one step at a time and it has to come from YOU.  Its never too late to start any type of exercise/activity.  Have confidence within yourself", she concluded.

Louise lives in Edmundston with her husband, Andrew. They have three children: 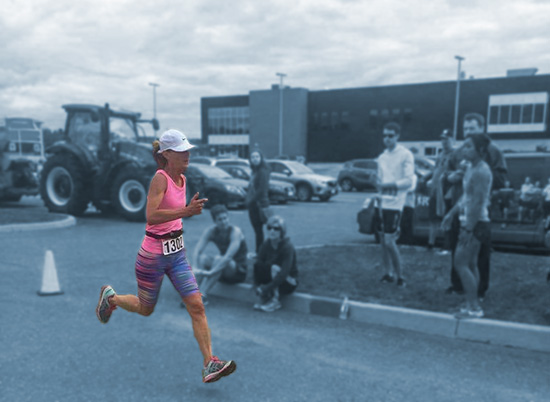