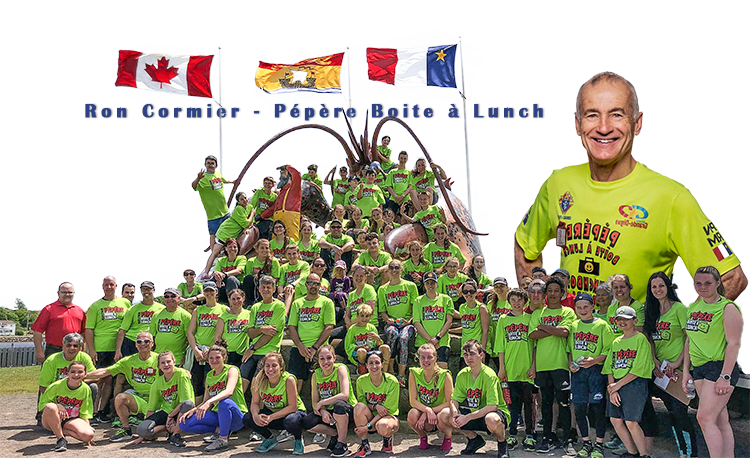 Ron Cormier started running in the winter of 2012, when he laced up to train for a five-km race slated for the spring as a way to way to stay in shape for his upcoming retirement.  He remembers how concerned he was when his coach said: “Tonight, we are going to run two minutes and a one-minute walk break and then another two minutes.”  He wondered if he had joined the wrong group or sport and if he was up to the task. 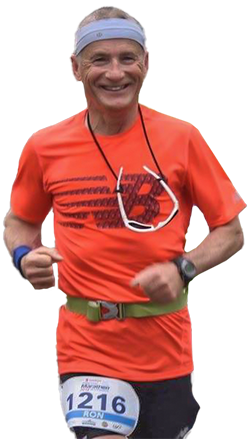 In 2016, he joined a Running Room Marathon Clinic and trained for his first marathon in Fredericton. The race was tough and as he read the clock about 300 meters from the finish line, he thought the clock was wrong; it was reading 3hr44min. It was not until his runner friends told him at the finish line that he realized that he had just qualified for the Boston Marathon with a negative split time of 3:46:00.

As an accomplished marathoner, Ron was selected to run the New York City Marathon but he had a cause in mind.  The Grande-Digue Elementary School principal had shared with him the urgent need of funds for food for hungry kids.  A local artist designed for him a bright lemony yellow running outfit that spectators on the course could see from a distance. Thus, Grandpa/Pépère Boite à Lunchwas born. He collected $750 from US strangers that year to help his cause. In the fall of 2016, the Lunchbox Grandpa campaign collected and gave to the Grande-Digue school over $7000, enough to cover the full year lunch program.

In the spring 2017, the Grande-Digue Elementary School organized a relay marathon for the students, naming it the Lunchbox Grandpa Marathon/Marathon Pépère Boite à Lunchwith the requirement that students would have to attain a certain number of hours of training to be accepted in the relay marathon.  The event also collected non-perishable food for the local Shediac Vestiaire St-Joseph foodbank. Fifty-three students participated in the first relay marathon with over 4000 lbs of non-perishable collected. To date, four of these marathons have taken place with nearly 20,000 lbs of non-perishable food delivered to the foodbank. Participating students received a Marathon Pépère Boite à Lunchfinisher medal.

In April 2017, Ron ran his first Boston Marathon with unknown expectation. At the Hopkinton start line, he was shaking, extremely nervous, and wondering why he was among the world’s best runners. He was so proud to bowing his head to receive the finisher medal. He ran two more Boston Marathon but virtually due to Covid-19, achieving a qualifying time of 3:52 at the PEI Marathon.

After running his 16th marathon, he reflected on how to approach the future.  Quitting not being an option, he wants to continue his involvement in the fundraising campaign to help kids in need.  He added: “I want to stay healthy surrounded by positive people because I am quite satisfied with the results.”  No matter what the weather brings, Ron does not change his training schedule, including extreme cold, hail, wind, rain, and deep snow. “I’m always ready for whatever mother nature throws at me.”

Ron ran more than 60 RunNB calendar race since 2012, including the Marathon at Legs, the Demi-marathon de L’Acadie, the Marathon by the Sea, the Fredericton Marathon, the 10km Georges Gallant and the 10 km Clarence Bastarache. He plans to join the RunNB Maritime Challenge 4000 for 2022.

His story was told in numerous medias, including l’Acadie Nouvelle, Brunswick News, Radio Canada and CJSE radio.  The Lunchbox Grandpa/Pepere Boite a Lunch campaign reached $75,000.00 to help the students in need in southeast New Brunswick.

Ron Cormier lives in Grande-Digue with his wife of 46 years, Nicole.  The couple has two children, Marcia and Pierre and two grandchildren, Noah and Samuel. 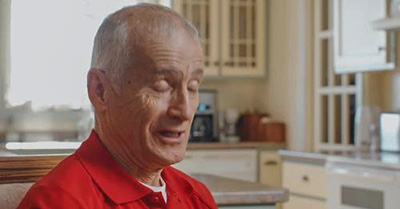