Runner vs the 2021 RunNB Challenge

The 2021 RunNB Challenge attracted 416 runners and walkers from New Brunswick and beyond with over 62 % succeeding in reaching the 1200 km mark and more.  For Yanick Tremblay, one or two loops around NB was not quite enough. After lagging behind, he succeeded in catching up to the leaders and become the overall winner of this challenge with an incredible total of 5742,2 km to his credit 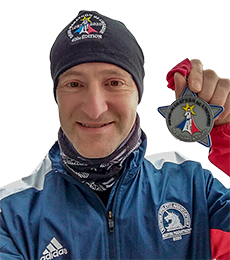 Tremblay started in 2006 as part of his rehabilitation program following a surgery to repair a complete tear of his right Achilles tendon.  He has not stopped running since that year.  Motivated by setting personal goals, he registered for various races ranging from the 5 km to the full marathon and Ironman.  He has run 33 marathons and 2 Ironman.  He ran the Demi-marathon de l’Acadie 14 times, his best time being 1:23:13.

“When I started the Challenge, I had a goal of doing 2 loops, 2400 km.  For the first months, I ran 50 km per week which was the minimum required to succeed”, he said.   But in April, May and June, he increased the number of km per week since he wanted to reduce his running during the summer to train in the pool and on the bike to be ready for an Ironman competition in August.  In June, the Ironman competition was cancelled.  That is when he decided that his goal would be to finish in first place at the RunNB Challenge.

With this new objective in mind, he had to increase considerably the number of km per month since there were several runners who were way ahead of him in the results. So from the 300 km that he was logging in in June, he tallied more than 500 km in July, August, September and October, increasing to 637 km in November and an impressive 750.5 km in December. “I calculated my last run so that my total would end by 42.2, the marathon distance”, he added.

All that running to catch up to the runners in front of him in the Challenge had a secondary benefit. Indeed, this high training volume allowed him to set a personal best at the Fredericton Marathon in September, his first time under 3 hours with a time of 2:51:59.  The following month, he ran the virtual Boston Marathon in 2:56:54.

Yanick admits that in spite of all the pleasure and satisfaction he experienced with the Challenge, he would not advise anyone to complete it with the intensity and volume that he did it.  “I succeeded despite a few injuries that I was able to manage while continuing to run.  However, with the high running volume in the last six months of the Challenge, the risk of serious injuries was omnipresent”, he admitted.   His advice to the 2022 Challenge participants is to listen to their body. “The Challenge is long; set an objective for yourself and run regularly throughout the year.   You will thus stay healthy and continue to run beyond the Challenge”, he concluded.

Yanick Tremblay lives in Beresford with his spouse, Nathalie Carrier.  They each have two children from a previous union, Karine, Sarah, Benoit and Vincent.